We drove up and down a thick green road, looking for a sudden mown opening, a squatty little domicile, some ancillary structures in states of collapse. Scattered around the yard – like they’d been coughed out – were buyable heaps of sun-beat, rain-swelled, frost-cracked objects.

We stopped at one where empty detergent bottles were bundled balloon-like, skewered on rebar. An arrangement of kneeling plastic nativity lambs was dedicated to Mandy. Bright annuals grew from the bowl of a toilet that tilted on lumpy grass. An old woman came down from her porch and told us the story of her life. It took about forty-five minutes. We listened, then got back in the car and continued to drive.

At the next stop were several junk cars, built when being in a car felt like being in a nice little house, where surely sex was much more comfortable than it is now, though contemporary carmakers claim to have our best interests in mind.

In each driver’s seat was a mannequin hastily dressed in loud tourist garb – Hawaiian shirts, floppy hats. Like real men, they watched us walk among the tables. I might’ve read the dregs of rain and tree debris in the stacks of soup bowls and coffee cups like tea leaves if I’d known how. The dirt in the bottom of a bowl I picked up looked like a little panting dog. 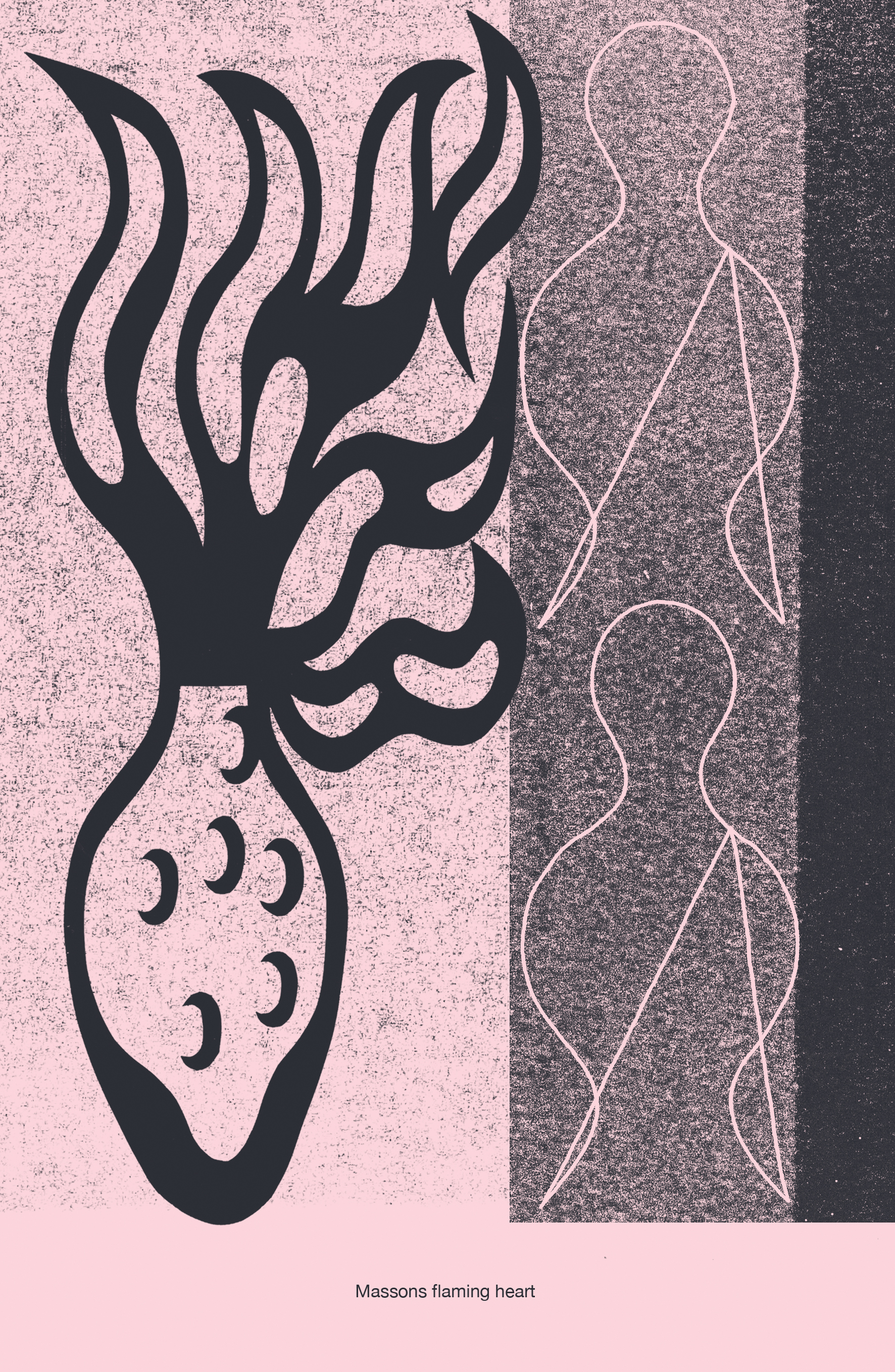 We brought the bowl to a shed where the proprietor sat behind a desk. Next to him was a lamp fashioned from the stiff, shiny, poorly preserved bodies of three juvenile alligators, one of which had a lightbulb screwed down its throat and an electrical cord coming out its rear. Business cards were propped on the fixed, spindly arms of another. In the open jaws of the third, a small, naked doll was wedged.

Towards the end of the day we turned off the road onto a long, rutted lane. We bumped along, then came to a clearing where a man sat smoking in a folding chair in front of a tidy white house. He lifted his beer in greeting when we got out.

Huh? my husband said. The man looked away. He drank his beer.

On a blanket on the ground near the man was a pie crimper, a dough scraper, several pitters and stoners, a couple of corers, a slicer. Too, there were some peelers and mashers and muddlers, a nut cracker, a pot nipper, a citrus reamer. We knelt and touched them.

Adam and Eve, the man said. He jerked his thumb towards the dark forest behind his house. You don’t have to tell me, he said.

Tell you what? said my husband.

I used to be young too, the man said. I know all about it, he said. He winked at my husband, then looked at me.

How much for the melon baller? I said.

Dollar, the man said. He took a long gulp from his can. I handed him the bill, which he crammed into his pocket.

Out in the woods, he said. In the grass. Natural, the man said, nodding. How God intended, he said.

On the way back to our rental, we wondered whether the melon baller man had murdered his wife. We passed several gruesome homemade signs pasted with pictures of aborted foetuses. It suddenly seemed clear we’d stumbled into a bible belt – a region of Jesus believers.

If Jesus had worn a belt, it would’ve been a rope.

A rope and a robe.

Roped and robed, we laughed – it sounded like sexual violence.

When we pulled up to the cabin, the thin mesh door wobbled uneasily in the breeze – we’d forgotten to lock it. Inside was a strong odour of garbage, the source of which, it turned out, was the small, ripe cantaloupe we’d left on the kitchen counter. I held it under the tap, where it felt heavy, tender, like rinsing a human head. I rubbed it dry, split it open, and scooped out the soupy seeds. With my new instrument, I popped out ball after ball and piled them neatly in a bowl.

I don’t like melon, my husband said after he’d swallowed some. But he ate more and I ate more, and then the bowl was empty. We sat listening to insects and birds. In another room, a clock was ticking.

We must’ve fallen asleep – how else to explain the thick sounds like quick footfalls on the grass outside? A grand wind gusted up and began to bully the trees. It slapped the sides of the house and rattled the old unfixed panes of glass. The mesh door trembled on its latch.

Kathryn Scanlan is the author of Aug 9—Fog. Her story collection, The Dominant Animal, was published in April 2020 from Daunt Books in the UK and Farrar, Straus & Giroux in the US. Her work has been published in NOON, Granta, and The Paris Review. She lives in Los Angeles.

A Type of Vertigo