Encounters between Mexican Flora and its Foreigners

From collective struggle to individual survival, Leon Trotsky fills his garden in Mexico with cacti.

Staff accompany him into the mountains in the hunt for certain specimens. They dig up the heavy cacti, wrap them in newspapers, gather up the surrounding soil in bags, replant them in the garden.

Trotsky was probably unaware of what he was doing: brutal extraction, disturbance of earth, destruction of an underground network.

Cacti / cactus. How counterintuitive, that plural ‘I’ and the singular ‘us’. 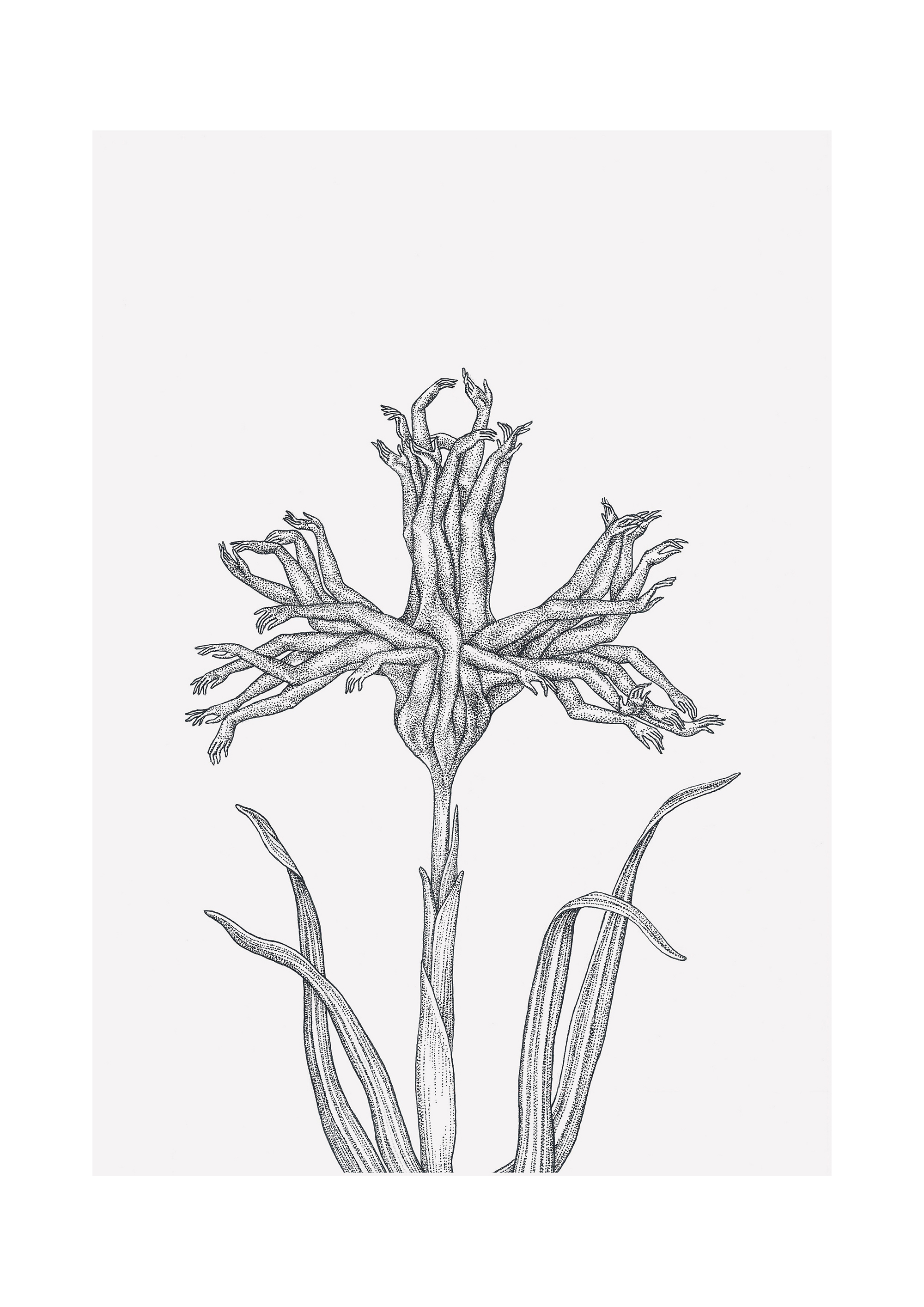 Trotsky’s cacti weren’t for protection. For that he had bars and steel shutters placed on the windows of his house and, after the first assassination attempt, added watchtowers to the garden wall. The prickly plants were ornaments, not sentinels; in his fortified prison, they stood more for expanse than restriction. Yet they also represented – vertical, monolithic, autonomous – an anchoring of place, and endurance.

Andre Breton travels to Mexico. He claims he has been sent on a cultural mission but the real reason, friends say, is to meet Trotsky whom he greatly admires. (They meet, take walks around Lake Pátzcuaro, and draw up a ‘Manifesto for an Independent Revolutionary Art’, which is co-signed by Diego Rivera for security reasons.)

‘A surrealist country par excellence’ is what Breton calls Mexico. It is therefore surprising that upon his return to France one of three presiding memories is that of a peasant in rags and a wide-brimmed hat, standing beside a giant cactus clutching a rifle. There is nothing alien or enigmatic about this image, nothing remotely surrealist: it is staged, clichéd, folkloric. Yet the peasant’s image is what endures, for the man embodies Trotsky’s revolutionary ideals and therefore the inspiring conversations Breton had while in Mexico.

‘There is a great deal written about what happens when we come into contact with a cactus’ painful spines but much less about what happens to the cactus when it comes into contact with a human. Like all fellow plants, cacti respond to stimuli. They feel the wrench when pulled out of the earth. Cactus theft, usually carried out under cover of the night, has become a serious problem, and threatens to destroy desert equilibrium in the southern United States and Mexico.’

From Trieste to Veracruz, Emperor Maximilian and Empress Carlota travel onwards to Mexico City. At the end of their first night, despite the great pomp and ceremony with which they are received, bedbugs in the mattress at the national palace force the Emperor to sleep on a billiards table and the Empress in an armchair. It is an occupied country at war, resentful of foreign intervention. The bedbugs are the first tiny voice of dissent.

Throughout his time in Mexico Emperor Maximilian enthuses to his courtiers about the native flora. An inquisitive man, he disembarks from the royal carriage to explore the land by foot. He admires the maguey and boasts of having first-hand experience of specimens that most naturalists in Europe, with the exception of Humboldt, only fantasize about.

Yet he is unaware of toloache.

Toloache / Datura innoxia is a nightshade with white trumpeted flowers and a prickly fruit. First used as a local anaesthetic, the Aztecs fed it to victims of human sacrifice before tearing out their hearts. In modern times it is used as an aphrodisiac. In high doses the plant wreaks havoc on the mind: great excitation followed by depression followed by disorientation and visual hallucinations.

For Empress Carlota, it certainly did not awaken any desire. She had shown signs of mental instability since childhood but legend has it that toloache was the final trigger, and that a healer had given it to her to drink at the marketplace. Others said it was being slipped into her morning coffee. In any case, Mexico, its land and its sorcery, began to inhabit her more deeply. Native flora was brought ‘indoors’, where it swiftly colonised the individual.

Emperor Maximilian and Carlota were themselves viewed as a colonising force when in reality they were victims of a tragic situation imposed by Napoleon III, intent on expanding his empire overseas. In 1867 Maximilian was executed on orders of Benito Juárez. Carlota returned to the melancholic castle of Miramare and thence to Bouchout Castle in Belgium. The madness continued to inhabit her, her mind a card shuffle of landscapes past and present.

‘Toloache is still easily found at marketplaces in Mexico, mixed into powders and potions that promise to kindle strong desire in the Other. In the United States the elusive Datura innoxia is now considered an invasive plant, little more than a weed, spread easily on the fur of animals that have entered into contact with its spiny capsules. Because of its high toxicity, some countries have prohibited its sale or cultivation.’

Antonin Artaud sails to Mexico, via Antwerp and Havana. He wrestles with the demons of morphine addiction withdrawal and excommunication, courtesy of Breton, from the surrealist group. He travels north to the Sierra Madre Occidental, home to the Tarahumaras.

Artaud is drawn to the Tarahumaras’ hermaphroditic principles, he is drawn to the peyote plant’s hermaphroditic roots: two halves clasping each other, an image of completeness and self-sufficiency. He has long been haunted by the thought that he does not possess his mind in its entirety. He recognises something transcendent in the androgyne.

In the Tarahumaras’ sacred lands he observes and partakes of their peyote ritual. It is a new kind of theatre.

Collapse ensues between inner landscapes and outer, another spell cast between the alien and the endemic.

Artaud is hostage not to historical events but to a mind preyed upon by idées fixes. Later on, he would ask for his name to be removed from his text about his voyage to the land of the Tarahumaras, and substituted by three stars: * * * like peyote buttons.

‘The peyote faces habitat destruction as well as overharvesting for ceremonial use. It grows slowly, flowers sporadically, and thrives in scrubby areas. If the crown with its buds is cut off too near the base, a common occurrence, the plant does not regenerate.’

For the rest of her days, Carlota lived in fear of being poisoned. Trotsky, during his shorter life, lived in similar fear, though his end was delivered by an ice axe with a wooden handle and a sharp metal head, of the kind used by mountaineers. Back in France, Artaud was certain he’d been hexed in Mexico and lingered under the spell. He also complained that he was being poisoned by his doctors at the psychiatric clinics where he spent the final decade of his life. By then, the saturated colours of the peyote trip had been replaced by a palette of monotony, magic ritual by medical monstrosity.

Chloe Aridjis is a Mexican writer based in London. She is the author of three novels: Book of Clouds, which won the Prix du Premier Roman Etranger in France, Asunder, set in London's National Gallery, and Sea Monsters, published in February 2019. Chloe has written for various art journals and was guest curator of the Leonora Carrington exhibition at Tate Liverpool. She was awarded a Guggenheim Fellowship in 2014 and is currently at work on her fourth novel, inspired by moths and magic lanterns.

Can You Be a Revolutionary & Still Love Flowers?

The (Dis)order of Things

Seven Poems for Seven Flowers and Love in All Its Forms